All news
Prev Next

Greetings from the Front Range 👋!

We're so excited to visit Denver ⛷, one of our newest Citymapper cities. ✨ There's much to learn, so we've called up some friends to talk transit over a round of western omelets. 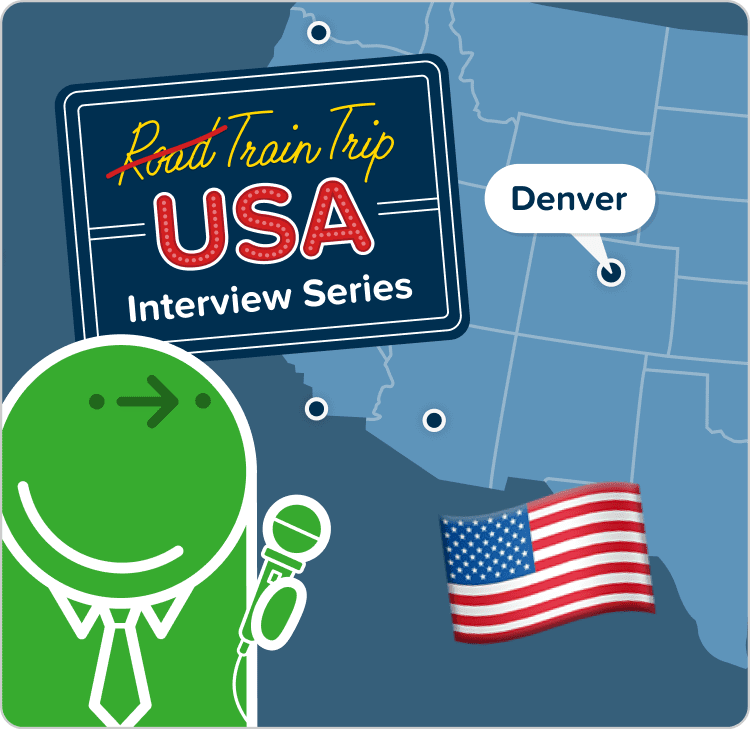 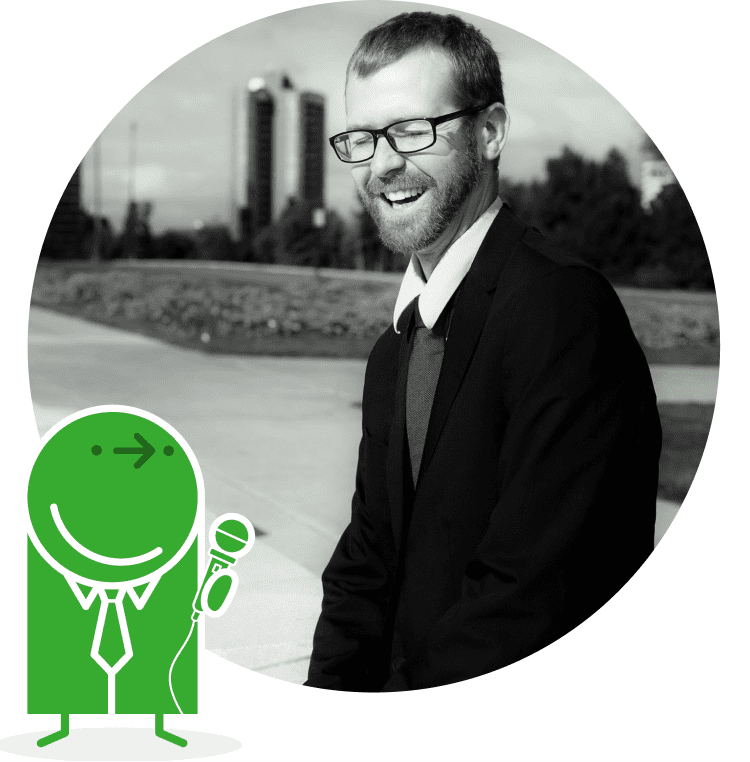 Deyanira Zavala is the executive director of Mile High Connects, a regional collaborative that has a history of leading transit equity work in the Denver region. 👩‍💻 As ED, she leads the development and implementation of Mile High Connects’ strategic direction. Deyanira dedicated her career to supporting aspiring Black, Latinx, and immigrant entrepreneurs in Colorado and Texas as a pathway to community asset & wealth building & which means ensuring transit supports communities. 🙌 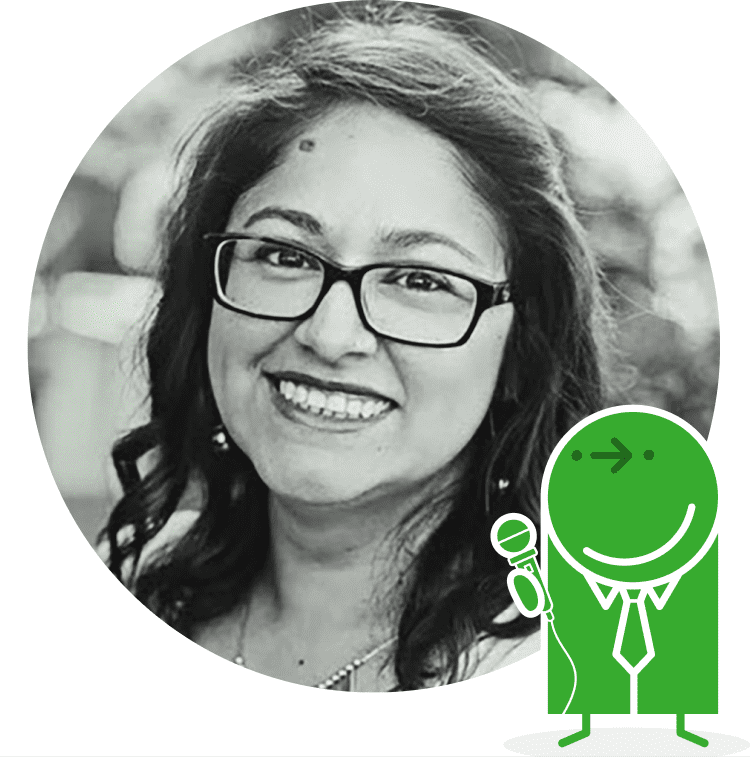 Tell us about the current state of public transit in Denver

Deyanira: Denver’s public transit can use some renewed energy! 🌱⚡️ It’s pretty expensive to ride our system, especially if you’re living paycheck to paycheck. Even with our low-income program, we know folks are paying full price to ride the system. Earlier this year, RTD hired a new General Manager, Debra Johnson, who has really focused on getting out and getting to know the community – that means connecting with riders and operators. This is important to rebuilding trust with residents that rely on transit. 🤝 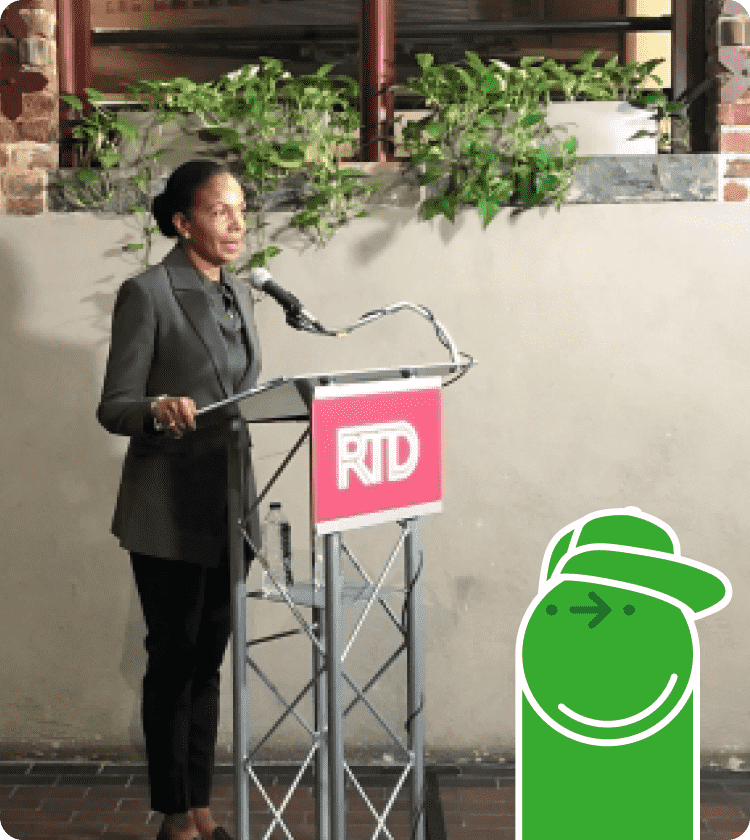 How do you think access to transit can make Denver a more equitable city?

Loren: Access to transit is a freeing aspect for a lot of disadvantaged folks. Due to a large blizzard the day on Sunday, RTD suspended all transit, resulting in people like this person trying to find alternate ways down one of the most active streets in America, East Colfax. 🤔 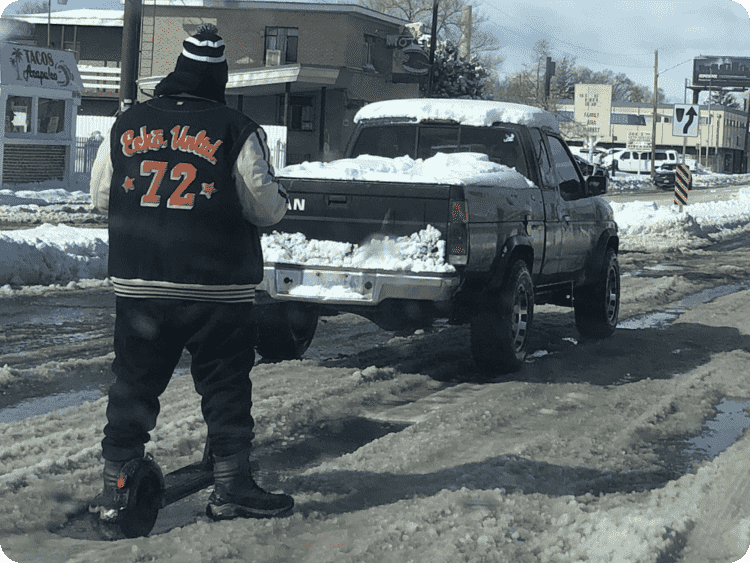 This is the consequence of nonexistent transit. The surrender of freedom from fear, freedom of mobility, and freedom of options when it comes to how to get from point A to point B, particularly for those who can’t afford single occupancy vehicles. 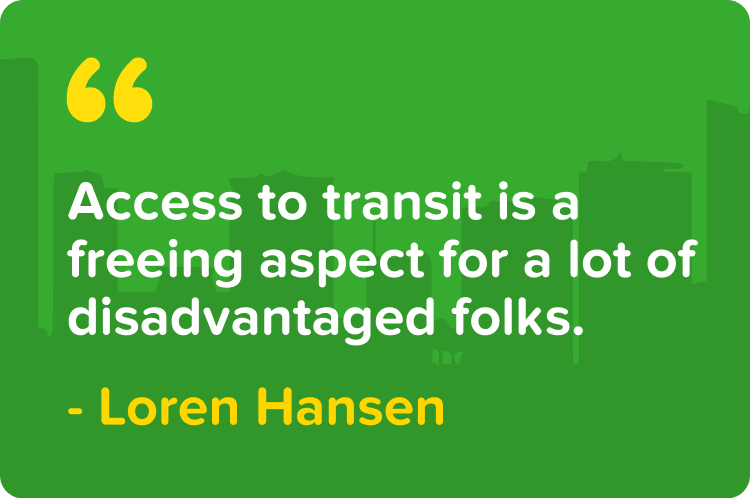 Loren: Taking the 0 bus 🚌 southbound along Broadway, which is a major corridor for bars, music venues, and small businesses, has always been a joy to me. 💚 In pre-COVID times it was my favorite place to hang out because there was so much life along that street and a great yearly festival that showcased local musicians. 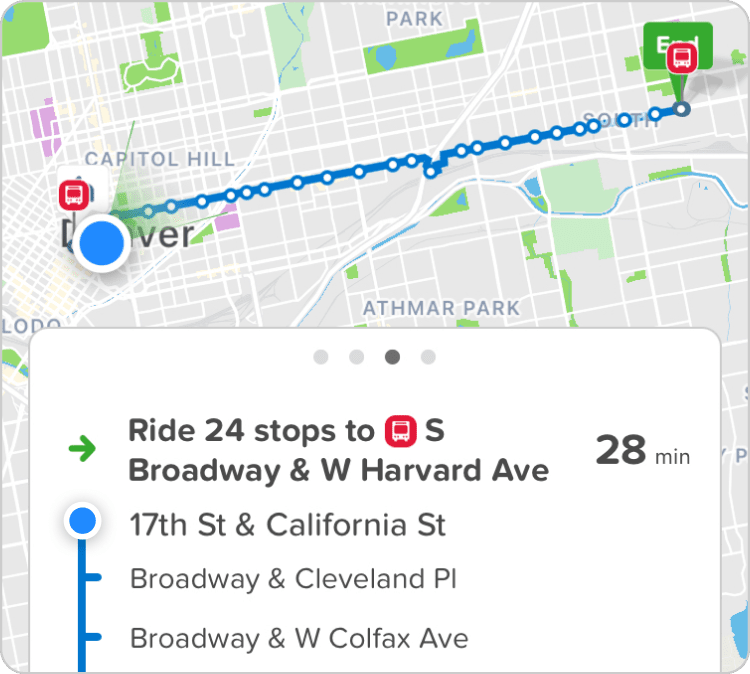 Deyanira: When I was living in Skyland, my favorite walks were around our neighborhood down towards City Park. 🏞 It has the best views of the city and mountains but is also a lively spot to be on a weekend. 🪁🏈🙃

What are you most excited about this spring in terms of active travel 🚶🚲 🛴? Do you have a favorite spot in Denver to bike or scoot?

Deyanira: The Denver region can be great for active travel. I’m looking forward to taking advantage of all the amazing parks we have in our region – Sloans Lake and City Park are my fave for cycle and taking in the city. 🚲 🛴

Loren: The biggest piece of excitement that I have is in regards to the Shared Streets and what potential they will have in conjunction with the bike infrastructure the mayor and Department of Transportation and Infrastructure have promised. Putting in permanent streets for people and bicycle riders 🚵‍♀️ would make it a lot easier to promote walking and riding as a tangible alternative to single-occupancy vehicles. For me, City Park is always a joy to bike to. It's one of the better views in Denver and isn’t too far from my home. 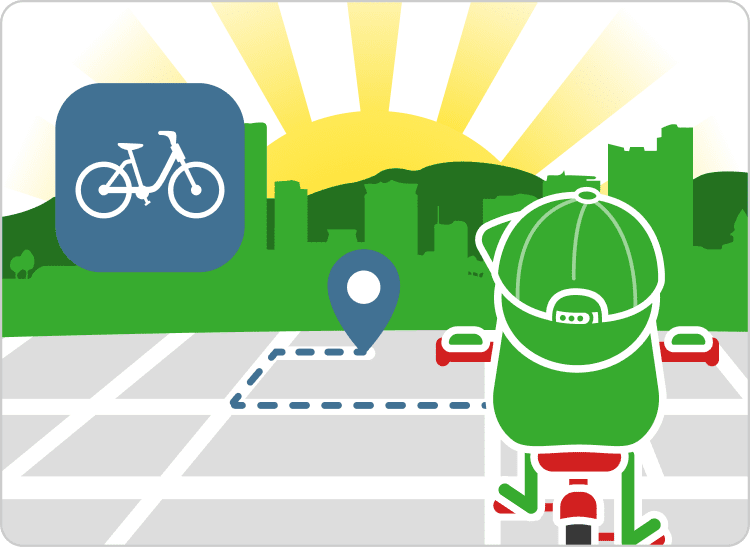 We've been keeping up with the FasTracks conversation. What are your thoughts on the proposed B-Line extension to Boulder and Longmont?

Loren: The B-Line has been the albatross over RTD’s head since the beginning of the 21st century. The major difference between then and now is the balance of power at the Capitol has shifted towards Boulder, as Governor Polis has used his position to push for it. RTD needs to focus on restoring service to those who already are regular ridership and rehiring operators before chasing a project that benefits an ever-shrinking Boulder/Longmont area. Besides, the FF fleet fulfills a lot of the promises of the B-Line right now. 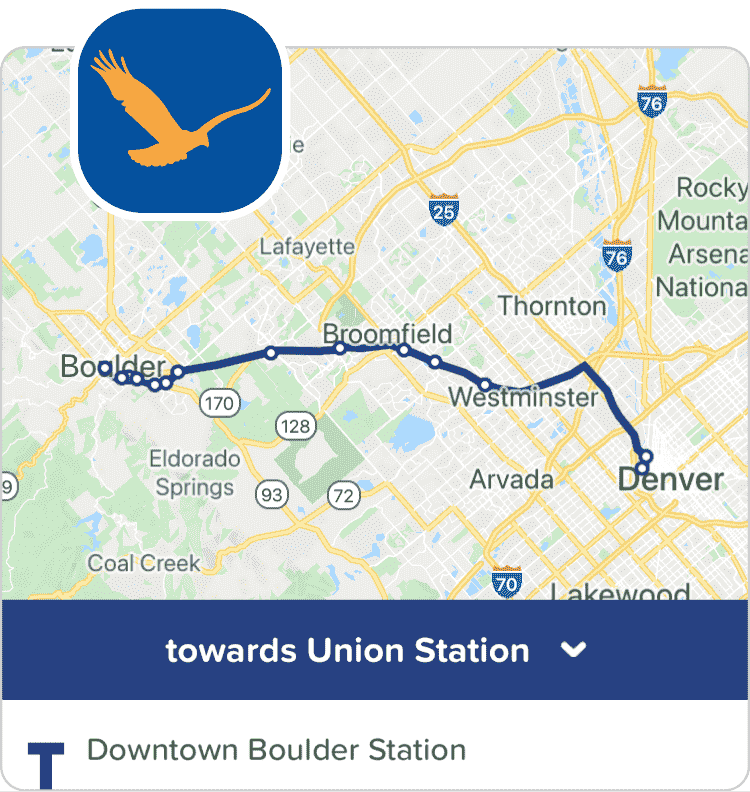 In a world where we're successfully coming out of the pandemic, what needs to be done to encourage residents of Denver to ride public transit without worrying?

Reduced bus schedules mean that folks are waiting in the snow for a bus that comes once an hour. Let’s get our schedules back to pre-COVID & keep the follower buses to keep folks safe. 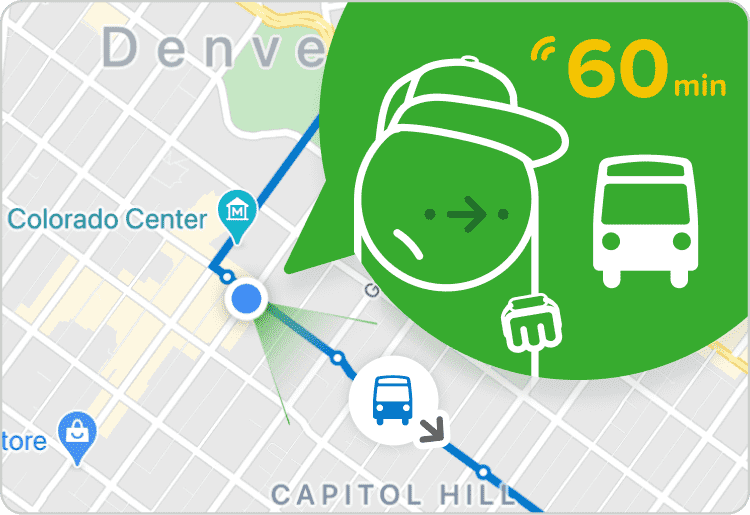 On cleaning - the easier we can make it to keep folks healthy and safe, the more willing folks will be to take public transit. This means offering handwashing stations near transit & keeping up with existing cleaning efforts. 😷 Though COVID is an airborne illness, just cleaning surfaces has likely kept us safer and healthier when it comes to other illnesses like the flu and colds.

Are there any lessons, case studies, innovations that other American cities can learn from Denver?

Loren: The best thing that Denver does, in particular, is the way that micro-mobility is regulated. Rather than completely ban devices such as e-scooters and e-bikes from the streets, Denver’s then Department of Public Works started a pilot program that capped the limit and amount of mobility devices and operators in the city. It’s a balanced approach to solving the last mile problem while making sure that companies cannot place their scooters anywhere with impunity. I am interested to see who gets the contract with the city once the pilot is over. 🙌 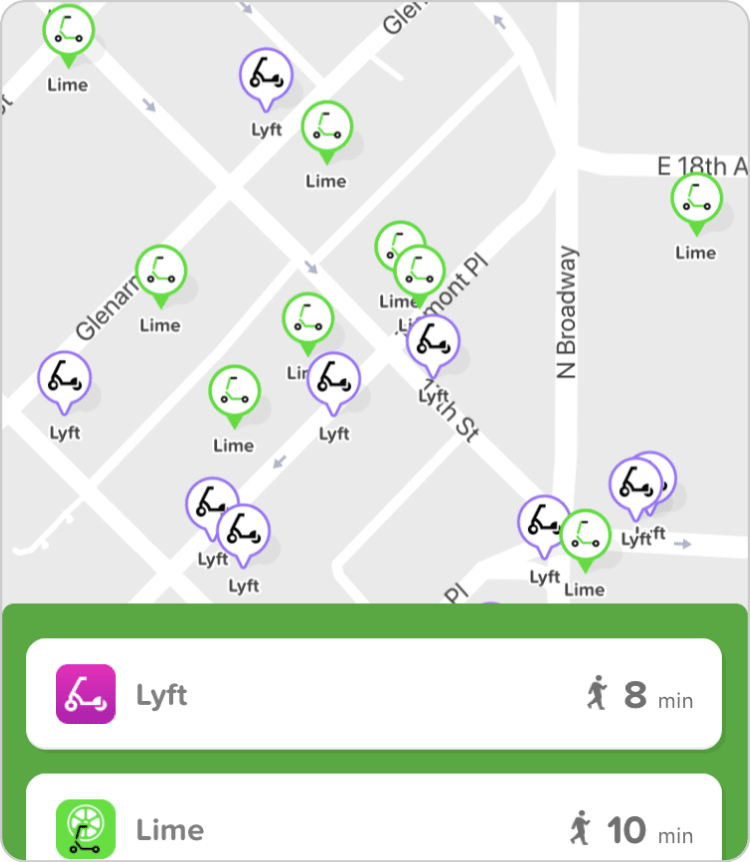 Deyanira: Great question - San Diego 🌴 and LA 😇 are on the top of my list of favorite cities where I can walk, bike, or take transit.

Loren: Kind of a curveball of a location, but Santiago, Chile 🇨🇱 I have a few friends from there that I have wanted to visit for a minute, have been itching for international travel, and, most importantly, have a pass for their regional transportation system, the Transantiago. Gotta get some use out of my passport before it expires. 👍

Favorite transit meme of all time? Which one is the G.O.A.T.?

Loren: Probably this video of Pachebel’s Ode to joy played by trains in Prague. Little niche but it's a hilarious video, and something I like as a classical music snob. 🎶

Thank you, Loren and Deyanira!

That's it for the Mile High City! Our train is heading back south 🛤 🌵 - we'll see you next week in another of our new cities.

PS. Have any thoughts on movement in Denver? Should we come to your city next? Don't be shy - drop us a line here or tweet at us @Citymapper

P.S.S. Late to the party? Catch up on the rest of our U.S. Future of Movement interview series below: